Chemical Protection- The Steps to Guard Yourself from SLUDGEM 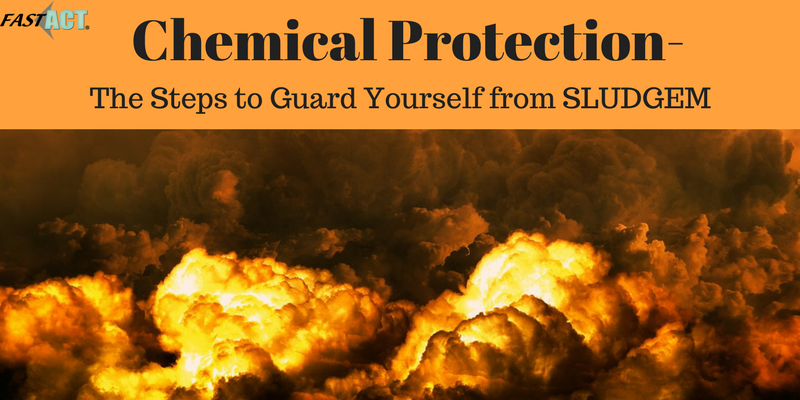 Chemical protection has become a scary reality in recent years, as the use of these dangerous and volatile chemical weapons have been used in several attacks that have taken place, specifically in Syria. Chemical weapons are usually a toxic chemical contained in a delivery system such as a bomb or shell that will release a chemical agent or nerve agent into the environment. These weapons may lead to massive destruction and danger to those exposed. Taking steps to protect yourself from chemical exposure or SLUDGEM (Salivation, Lacrimation, Urination, Defecation, Gastrointestinal upset, Emesis, Miosis) will be essential in ensuring you guard your health and environment against chemical harm. 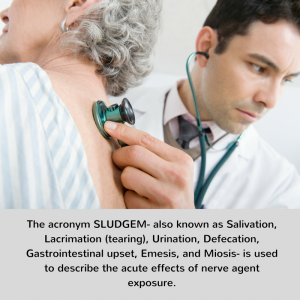 The acronym SLUDGEM- also known as Salivation, Lacrimation (tearing), Urination, Defecation, Gastrointestinal upset, Emesis, and Miosis- is used to describe the acute effects of nerve agent exposure. Nerve agents will elicit an overstimulation of the muscles by an excessive collection of neurotransmitters acetylcholine. When nerve agents are released into the environment either in liquid or vapor form, the “human pesticides” will affect those exposed and can lead to health conditions like SLUDGEM. Inhalation will create an onset of these symptoms within minutes or even seconds, whereas being absorbed through the skin the symptoms may show up in 30 minutes to even 18 hours after exposure. Chemical protection, based on the symptoms above, are items to consider, and gear that you may want to be armed with in case a chemical attack or release occurs in your environment.

What Does Nerve Gas do to Human Health?

Nerve agents are classified as highly toxic and quick acting chemicals that affect exposed individuals. These agents enter the body primarily through the respiratory tract but can also be absorbed through other means including the eyes and skin. When an individual is exposed to nerve agents, the agent before it enters the body will inhibit the normal acetylcholinesterase action- a chemical within the body that’s normal function is to break down the chemical acetylcholine-will block the acetylcholinesterase from breaking down the acetylcholine which will cause extreme muscle cramps. Also, other symptoms will possibly be elicited such as SLUDGEM signs.

Nerve agents are all colorless liquids that can be used in different methods to attack or harm many people. Nerve agents have developed a dominant role among lethal CW agents since World War II. The name nerve agents come from its ability to affect the transmission of nerve impulses in the nervous system. The top types of nerve gas used in chemical attacks in recent years are Sarin, VX, Tabun, and Soman. VX gas will mainly be effective through direct contact with the skin, whereas conversely, Sarin will be mainly taken up through the respiratory organs. And both Soman and Tabun gas can easily be taken in through skin contact or through the respiratory system.

Chemical attacks such as in Syria has invoked a major concern to be prepared with chemical protection gear that can shield yourself and your environment in the event of a chemical attack or release in your area. Syria has the world’s largest stockpile of chemical weapons following Russia and the United States. Thus, having chemical decontamination gear and a plan of attack for a potential chemical attack can be vital in ultimate protection.

SLUDGEM – Steps to Protect Yourself

How can you protect yourself from a potential chemical attack? Planning accordingly for any type of chemical release is your first step in ensuring that you minimize the potential risks to not only your health but your environment. Below is a step by step guide on the necessary steps to implement when dealing with a chemical attack or release.

Identifying and being aware of the areas that are compromised by nerve agents is vital. You want to make sure that if you are in an exposed environment that you immediately and as swiftly as possible go to a safe area to help reduce the looming risks. The longer the time of exposure the increased level of danger to your body and health.

The next step is to neutralize the released chemicals or nerve agents that have been exposed in your environment. Finding a product and technology that can effectively neutralize the exposed chemical warfare agents is needed to ensure that you are safely and efficiently ridding the environment of the toxic chemicals. FAST-ACT utilizes a proprietary formulation of non-toxic high-performance specialty materials effective at neutralizing a wide range of toxic chemicals with the added capability to destroy chemical warfare agents. FAST-ACT comes in a variety of applications from surface decontamination to vapor decontamination products. The FAST-ACT 500 Gram Shaker Bottle is ideal to use for liquid chemical releases, the powder is applied on the direct chemical release giving it the ability to work to completely neutralize the nerve agents or chemicals. The FAST-ACT Pressurized Cylinder is used for vapor chemical releases and acts like a fire extinguisher releasing the technology out into the air to neutralize the chemicals.

Step 3: Health Support for Those Exposed

Exposure, in any increment, could lead to health problems and getting a check-up to ensure that you are in good health following this event is important. In some cases, you may need to be administered atropine- a medication used to treat certain types of nerve agent and pesticide poisonings- to aid in the removal of nerve agents in your body and stop symptoms of SLUDGEM in its tracts.