The Dangers of Acid Attacks in London: A List of the Most Corrosive Acids

Violence was once predominately accomplished through the use of guns & knives, but as time has progressed attackers have turned to a new method of violence focusing on a new weapon – corrosive acids that have been deployed in many acid attacks that have increasingly occurred throughout the UK. The United Kingdom has one of the highest rates of acid attacks per capita in the world, according to the Acid Survivors Trust International (ASTI).

Why has acid become the new weapon of choice among gang members and attackers? Acid use to be a weapon of last resort, however, due to its easy accessibility and the fact that it is hard to monitor has amplified the use of these acids in attacks ten-fold. Recently attacks in the UK have transpired on the streets – particularly to food delivery drivers in an effort to steal their scooters, on the London trains, and even in London nightclubs where frequent acid attacks have happened leading to a dangerous environment to many as the chemicals/acids quickly disperse into the air. What can be done to protect UK civilians from these dangerous attacks & chemicals?

The Rise of Acid Attacks

Acid attacks in London have increased dramatically in recent years, and lawmakers and the police force are now contemplating methods to make acids that are commonly used as weapons, more difficult to obtain for the general public.

The culprit for these steadily increasing acid attack statistics is primarily from gang disputes. The UK acid attackers saw a strong correlation of male victims, unlike many countries that saw about 80% of acid attacks against women. This could be due to the high poverty and lack of opportunities for many young men in London that are led into the world of gang violence. 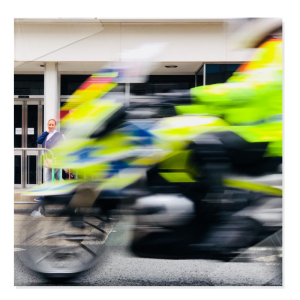 What is an Acid Attack – and Why is it so Lethal

Acid attacks, also known as acid throwing, is a form of violent assault explained as the act of throwing corrosive acid onto somebody’s body with the intention of significantly harming, disfiguring, or killing the intended victim. The most common acid used in these attacks are sulpheric acid, which is found in car batteries. Also, commonly used is nitric and hydrochloric acids.

These acids when thrown onto a person’s body will start to melt the flesh, sometimes to the bone, and leave permanent scarring or even physical disfigurement. The overall long-term consequences of these lethal acid attacks can include blindness, permanent scarring of the face or body, and also social, psychological, or economic difficulties.

Identifying the Most Corrosive Acids Used in These Attacks 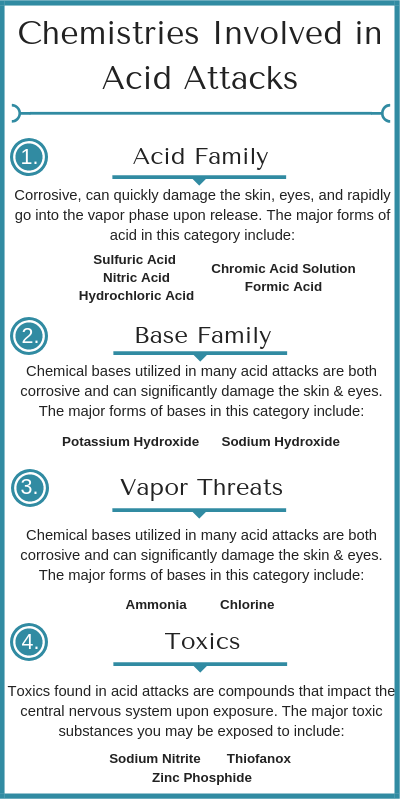 Corrosive, can quickly damage the skin, eyes, and rapidly go into the vapor phase upon release. These are all dangerous characteristics of acid chemicals composed of the acid family utilized in acid attacks. The major forms of acid in this category include the following:

To effectively combat these corrosive substances, a need for an efficient neutralization agent like FAST-ACT is high. FAST-ACT works by converting the inorganic acids to metal salts and water. Once FAST-ACT is deployed the proprietary technology works to contain and neutralize the acids to a safer pH. 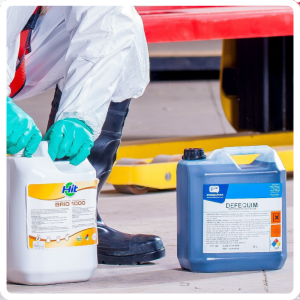 Chemical bases utilized in many acid attacks are both corrosive and can significantly damage the skin & eyes. The major forms of bases in this category include the following:

To effectively combat these corrosive substances, a need for an efficient neutralization agent like FAST-ACT is high. FAST-ACT works by suppressing the vapor & containing the liquid with the excess FAST-ACT bringing its pH into a safe range.

Chemical & liquid threats used in many acid attacks can corrode and cause severe respiratory issues as it rapidly expands to fill the air space. The major vapor threats released in an acid attack include the following:

Toxics found in acid attacks are compounds that impact the central nervous system upon exposure. The major toxic substances you may be exposed to during an acid attack include the following:

To effectively combat these corrosive substances, a need for an efficient neutralization agent like FAST-ACT is high. FAST-ACT interacts with the Nitrogen, Phosphorous, or Sulfur of the compounds to break the bond with the large molecule resulting in a byproduct bound to the FAST-ACT material resulting in neutralization.

Treating not only an acid attack victim but also the environment in which the acid attack took place is critical to minimize exposure to others from the abrasive & corrosive acids used in these hazardous attacks.

The first step to implement when someone has been attacked with acid is to make sure the area where the incident took place is safe and take the necessary actions to ensure the corrosive acids and substances are neutralized. The many different chemical families used in these attacks are problematic for responders because of the various mechanisms needed to address all of the present substances in the environment. First responders would have to test and determine what mechanisms to use to neutralize the substances. However, a solution like FAST-ACT can address both liquid and vapor threats from the Acid, Base, Vapor, & Toxic categories, including CWAs.

Secondly, you will want to treat the victim by dousing the burn with water for at least 20 minutes. Try to gently remove any clothing with the substance on it and call first responders ASAP for treatment.

The steady increase of acid attacks in the UK has not gone unnoticed, as plans of recourse are being strategically made in an effort to reduce this growing number of acid attacks. Former Home Secretary Amber Rudd has a plan to ban the sale of corrosive substances to those under the age of 18. However, being prepared – particularly the police in the UK, as well as other countries – with the necessary solution for acid attack neutralization is vital in helping to reduce the imminent threats present in the environment.