Deadly Chemicals to Humans – Modern Chemical Weapons to Protect Yourself Against 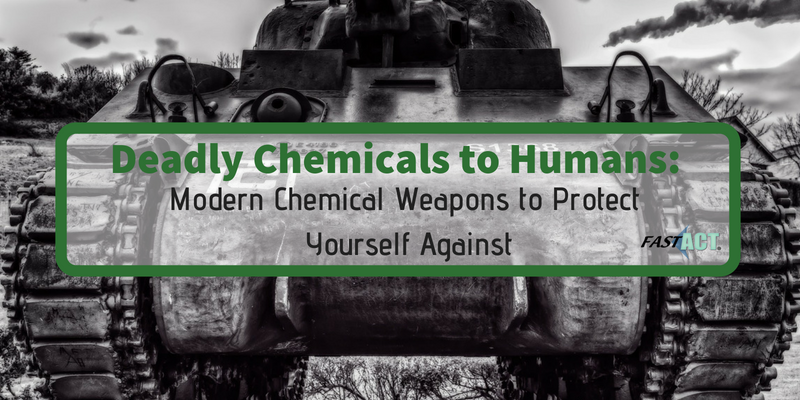 War is ever present in the world, as conflict is always to be an issue when dealing with different ideals, religions, and government structures throughout varying countries. As time has progressed the art of war has been molded and refined. And with the introduction of new deadly chemicals and warfare agents over the last century, military’s have taken to deploying these agents to strike the greatest level of destruction amongst their enemy. Military leaders around the world have even stated publicly that chemical weapons pose one of the biggest threats to soldiers in modern combat. This demonstrates the perilous nature of chemical warfare agents and the importance of knowing how you can protect yourself in the ill-fated event that you become exposed to these potentially deadly chemicals.

What Are Chemical Weapons

The action of chemical warfare involves the use of toxic chemical substances as weapons, that is then deployed onto the enemy. Chemical weapons are any chemical which through its chemical action on life processes can cause severe effects such as death, temporary incapacitation, or even permanent harm to humans exposed to this agent. And with modern chemical weapons increased the level of sophistication and complexity, the danger presented by these weapons is at an all-time high. Modern chemical weapons come in a variety of forms, including solid, gas, and liquid.

Before modern chemical weapons came to be there were over 160 years of chemical warfare deployment used in battle. It all began with the British forces in the Crimean War and the Union forces in the American Civil War. They would fill artillery shells with chlorine gas and fire it against the enemy. Although these were the first actual deployments of chemical weapons in war, the first full weaponization of chemicals occurred during World War I where all sides used a variety of different chemical agents, most notably chlorine gas. However, as wars progress through time the level of danger has only heightened, with dangerous agents being introduced into war with each new conflict that arises.

Chemical warfare agents all possess different characteristics which arrange them into different categories. This classification is based on the agent’s potency, persistency, mode of delivery, size, and mechanism of action. The three major chemical warfare agent classes include nerve agents, blister agents, and choking agents. Each of these classifications presents different hazards and effect to the environment and to those exposed to the toxic chemical agents. Identifying, understanding the effects, and knowing what measures to take with each chemical weapon agent classification is important in preparing for the unfortunate case that the agent is dispersed into your environment.

Nerve agents have had an entirely dominate role since World War II. The name for this classification was established due to its effect on the functions of the nervous system, specifically the transmission of nerve impulses in the nervous system. Nerve agents were first developed in the early 1930s by a German chemist that was on the pursuit to develop a pesticide, rather than a toxic chemical warfare agent. By the ending of World War II, the three “classic” nerve agents, Tabun, Soman, and Sarin were established making up the known G agents class. Nerve agents have been recognized as being more toxic than the other reported CW agents, as they are highly toxic and can cause death within a few minutes to a few hours after exposure.

The signs and symptoms of nerve agent exposure can impact the eyes, nose, mouth, pulmonary tract, gastrointestinal tract, sweat glands, muscular systems, and central nervous system. Nerve agents can be hazardous as it can be absorbed through inhalation or skin contact, making most nerve agents quite volatile and worst of all colorless which makes it extremely difficult to distinguish. When you have exposed to nerve agents in your environment the chemicals in the agent work by disrupting the central nervous system, creating a build-up of a molecule found in the body called Acetylcholine. The body constantly has to remove those acetylcholine molecules from the receptors or the build-up can cause extreme danger and lead to an array of health issues.

After the development of the “classic” nerve agents, an even deadlier nerve agent was born called VX, “venomous agent x”. VX was discovered in Britain in the 1950s, and in the past years following its development, the agent was recognized as one of the most lethal chemical warfare agents. In its purest form, the agent is colorless, tasteless, and odorless. The VX chemical molecules interfere with the way glands and muscles function by blocking an enzyme that allows them to relax. Thus, leading to uncontrollable muscle clenching and ultimately an inability for the victim to breathe.

Blister agents or “vesicants” are chemicals which have severely irritating properties that produce fluid-filled pockets on the skin and can lead to damage of the eyes, lungs, and other mucous membranes. These agents were the most commonly used chemical warfare agent used during World War I. However, they were first tested in combat in 1917 by Germany and have been used in several conflicts since, specifically in the Iran-Iraq war.

The major types of blister agents include sulfur mustard (H, HD), nitrogen mustard (HN), lewisite (L), and phosgene oxime (CX). They are primarily dispersed in liquid or vapor (aerosol) form and may persist for a day in the environment. When exposure occurs in humans that have been impacted by blister agents in their environment they can start to experience issues upon inhalation that will affect the upper respiratory tract as well as the lungs, producing pulmonary edema. Blister agents may be fairly hard to detect as it does not have a strong smell – with only a hint of garlic, geraniums, or fish – so detection could be a potential issue for many in a tainted blister agent environment.

Choking agents are defined as chemical agents who attack lung tissue, primarily causing pulmonary edema. This type of chemical weapon agent is depicted by noticeable irritation of the upper and lower respiratory tract. This group includes the chemical agents such as phosgene (CG), diphosgene (DP), chlorine (CI), and chloropicrin (PS). The two main types of choking agents that are most commonly used are phosgene (CG) and chlorine (CI). Both of these agents could be easily obtained by a terrorist group, and once deployed into the environment it will become a gas rapidly but will be non-persistent in the environment. After exposure to these agents, it can begin to elicit irritation to the eyes and the airways. Associated symptoms could also include coughing, shortness of breath, chest pain, and pulmonary edema. 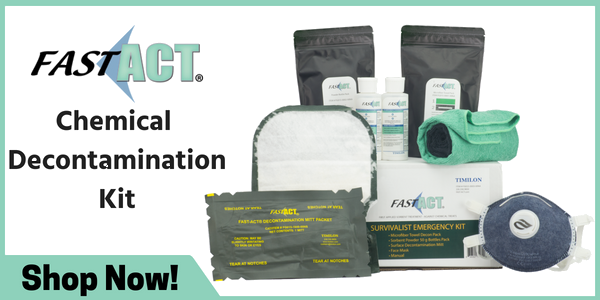