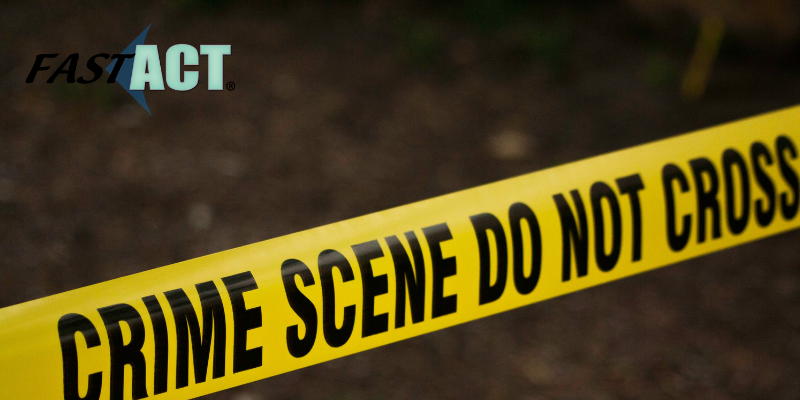 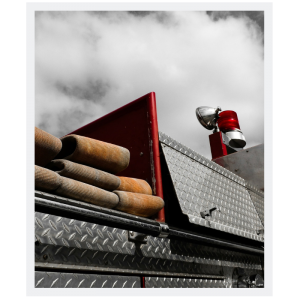 Emergency responders and HAZMAT teams are responding to a growing number of calls involving the reported new suicide trend that has been evolving in developed countries. Chemical suicides, also known as “detergent suicides” was first seen in Japan in 2007 and has since spread into other countries like the United States that is responding to a number of these incidents recently – with many emergency responders being called to the scene of chemical suicides.

“Detergent Suicides” was the named labeled to this incident by the media because it contains the use of household chemicals that are mixed together to produce a highly toxic concentration of hydrogen sulfide gas. The individuals involved in these incidents will remain in a closed area like a car, small room, or even a closet in the pursuit to receive instant effects both severe and/or deadly.

This trend developed online through the availability of instructions that were posted via the web. And has since grown into a devastating trend because of its assumed “painless” option for killing oneself. However, the inherent risks produced from this type of suicide can be dangerous not only to the victim but also to first responders and emergency personnel that enter the scene unprepared or unprotected for a chemical vapor/liquid release. What can emergency response personnel do to become more aware and prepared for chemical suicides? 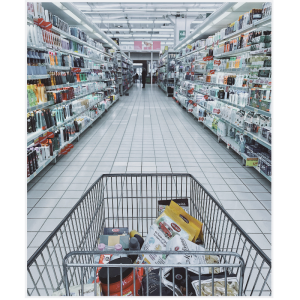 Chemical suicides involve the mixing of common household chemicals that create a deadly hydrogen sulfide (H2S) gas. Hydrogen sulfide is a colorless gas that has a distinct, strong odor of rotten eggs or sulfur. When this chemical turns into a vapor in high concentrations it can be highly dangerous, particularly to first responders who show up to the scene without proper respiratory protection. This chemical is an olfactory nerve paralyzer that can rapidly fatigue one’s sense of smell, even in low volumes.

Hydrogen sulfide is constructed by mixing hydrochloric acid with a sulfur-constructed compound. Both of these chemicals are easy to obtain and can be purchased at a local grocery, hardware, or big box store. The chemical, when created, will turn into a gas called asphyxiant that is known to suffocate victims at the cellular level, rendering the cells in the body unable to use oxygen.

The effects and symptoms of hydrogen sulfide exposure will begin almost immediately after exposure. At high concentrations, this chemical can be very deadly as it is nearly impossible to detect with no odor to it at all – because olfactory nerves are completely stripped of function of smell. Some other symptoms that someone will experience from exposure includes the following:

Another toxic gas that is sometimes found to be used in detergent suicides is hydrogen cyanide. This type of chemical used in these incidents is less likely to be used because of the difficulty in acquiring the consumer products needed to construct this chemical. Hydrogen cyanide gas is created using an acid source and cyanide salts like sodium cyanide or potassium cyanide. This chemical is easily absorbed through contact with the mucus membranes, eyes, and skin. The odor produced from this chemical is correlated with the smell of bitter almonds and can be a very strong and overwhelming odor in the environment. Some of the key symptoms that a person will experience from exposure to hydrogen cyanide include the following:

Signs of a Chemical Suicide

From 2008 to 2011 there were a total of 72 chemical suicides that were documented in the United States. About 80% of these incidents resulted in injuries to police officers, firefighters, emergency workers, and even civilians exposed to the gas. After the high level of injuries to emergency responders from chemical suicides, first responders are taking more care at crime scenes to detect signs of this type of incident in an effort to protect themselves. The signs that may be displayed at a chemical suicide crime scene can include these specific signs:

The dangers presented to emergency responders upon contact with a chemical suicide is extremely high and due to the nature of the chemicals – as it is usually found as a vapor – can spread rapidly throughout the environment. When the confined space is opened this vapor can seep out and rapidly affect a large area and more important effect those exposed to the chemical vapor. The chemicals used in the chemical suicide can even continue to off-gas for an extended period of time way beyond when the incident took place. 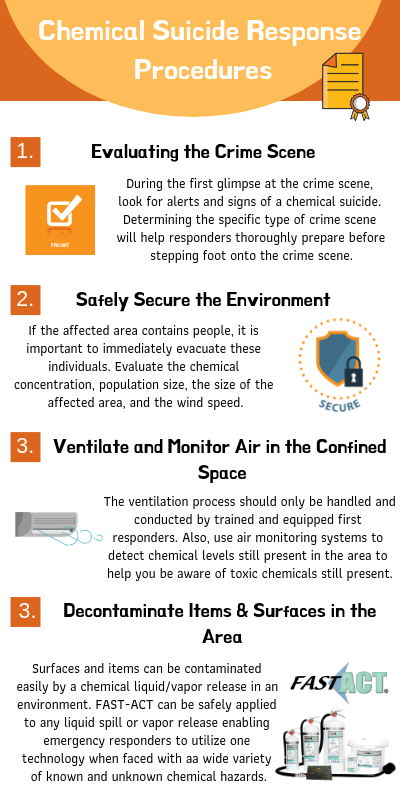 During the first glimpse at the crime scene, look for alerts and signs of a chemical suicide. Determining the specific type of crime scene will help responders thoroughly prepare before stepping foot onto the crime scene.

If the affected area contains people, it is important to immediately evacuate these individuals. Evaluate the chemical concentration, population size, the size of the affected area, and the wind speed. All of these factors can play a role in the containment and decontamination process.

Ventilate and Monitor Air in the Confined Space

When the area has been secured and analyzed extensively for potential hazards in the area, you will be able to start the ventilation process. The ventilation process should only be handled and conducted by trained and equipped first responders. Also, use air monitoring systems to detect chemical levels still present in the area to help you be aware of toxic chemicals still present.

Decontaminate Items & Surfaces in the Area

FAST-ACT is a proprietary formulation of non-toxic high-performance specialty materials effective at neutralizing a wide range of toxic chemicals with the added capability to destroy chemical warfare agents. FAST-ACT is offered in pressurized cylinders capable of addressing both liquid and vapor hazards, manually dispersed containers, kits for liquid hazard treatment, and mitts for equipment and small-scale decontamination. FAST-ACT can be safely applied to any liquid spill or vapor release enabling emergency responders to utilize one technology when faced with aa wide variety of known and unknown chemical hazards.