The Ultimate Doomsday Prepper Spill Kit to Have When SHTF 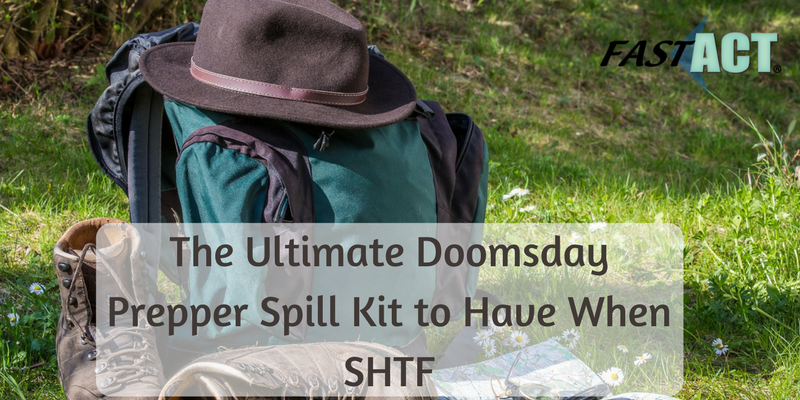 The term “Doomsday Prepper” has gained an increased popularity in recent years as the potential fears presented to human life from wars, conspiracy theories and overall concerns of natural disasters presented in the environment have driven people to start “prepping” for these potential situations. When the average American hears the words “Doomsday Preppers” they may associate these people as being paranoid, worried or even crazy but do they preppers really have the right idea and overall advantage over the rest of us when potential SHTF?

The survivalists who make preparations and collect supplies for various doomsday scenarios have been around for years, dating as late back to the Mayans or even before! In actuality, years ago no one used the term “prepping” because everyone was essentially a prepper. People would grow their own food and crops, perform their own first aid remedies, and many other “survival skills”. Today, however, with our lack of knowledge on many of these “survival skills” we have to depend on prepping supplies like first aid kits, canned foods, and protective gear to aid us in these situations. As “preppers” stock up their survival supplies in preparation for hazardous conditions, there may be one area in which preparation and supplies are lacking, thus being chemical & gas protection. Potential attacks using chemicals and gases like chlorine and mustard gas could be a looming threat to humans as recent wars in Syria and potential threats from North Korea have increased worry in preppers minds on this issue. We are going to discuss the best chemical protection gear to have in your supply arsenal and what potential situations in which this gear will come in handy.

Preparing Your SHTF Plan – Get Your Survival Kit Ready

Most preppers are identified as being predominantly middle-class people with average jobs. The number of preppers is unknown, but a poll done by the National Geographic Channel indicated that 28 percent of Americans know a “prepper”. Today’s preppers worry about a list of possible disastrous events such as an economic collapse, war, oil shortages, and natural disasters. With these worries, an experienced and well-versed prepper will have a when SHTF (Shit Hits the Fan) plan ready to execute when the time presents. SHFT is a prepper word that is commonly used in the prepper “lingo”. Some other common words that most preppers use include TEOTWAWKI (the end of the world as we know it), WROL (without rule of law), and BOB ( Bug-out-Bag). Bug out bags are an essential aspect of many survivalists SHTF plans as preparing items like food, water, and ammunition are commonly stored in this prepper bag, as well as an array of devices and tools that will come in handy should there be no electricity or water supply.

Many survivalist sites will give you a well-formed list of supplies to include in your SHTF plan and bug out bag. However, in this list protective gear from chemical attacks is a lacking component and potentially crucial missing piece in your SHTF plan. Chemical warfare is still a looming threat with attacks going on in Syria, as well as possible threats from countries like North Korea. Chemical protective gear including a VapourKlenz Face Mask (for removal of chemicals and odors in your air), Powder Bottle Pack (for quick chemical decontamination in a powder formula), Decon Mitt (for easy cleaning and patting of chemicals on items), and a Microfiber Towel (that absorbs up large chemical spills). These four products make up the ultimate doomsday prepper spill kit to have on hand when SHTF. 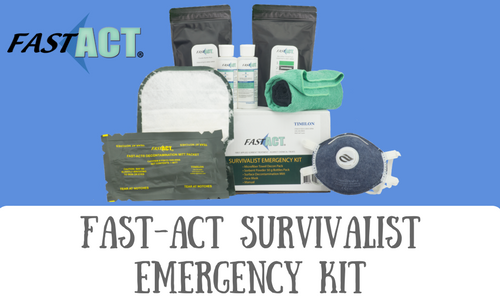 Dangers of Chemical Attacks & Protecting Yourself

A chemical weapon is a toxic chemical that is contained in a delivery system of either a bomb or shell, according to the Organization for the Prohibition of Chemical Weapons. Chemical weapons were first introduced in 1915 when the German military opened 168 tons of chlorine gas in Ypres, Belgium resulting in the death of 50,000 fighters. Two years later, the first deployment of sulfur mustard was released and led to the main cause of casualties in World War I. The main different types of chemical weapon agents include Nerve Agents (sarin& VX), Vesicating or blistering agents (mustard gas), and choking agents (chlorine), all potential chemicals used in chemical warfare.

Although a number of international treaties have restricted the production and stocking of these hazardous chemical weapons, there are still reports that several countries continue to stock these chemical agents. In July of last year, the Syrian government appeared to admit their guilt of possessing these chemical weapons. And just as recently as two days ago, there were casualties in Syria related to Chlorine attacks making chemical attacks a major danger to civilians. For those that find themselves in a situation of chemical hazardous or end of the world preparation, make sure to learn how to prepare for a chemical attack in case you find yourself in the need of chemical protection. 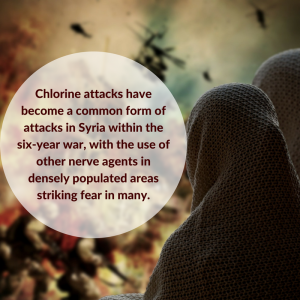 Chlorine attacks have become a common form of attacks in Syria within the six-year war, with the use of other nerve agents in densely populated areas striking fear in many. Medical staff treating those affected by these attacks have shown breathing difficulties as well as other health problems. The potential health damage that chlorine attacks can pose to those in affected areas can be quite dangerous. Preppers, after seeing these attacks may want to take steps to protect their health if a situation may ever occur similar to those in Syria. The FAST-ACT VapourKlenz Face Mask is the ideal protective gear to have when exposed to chlorine or other nerve agents in the air. The FAST-ACT technology has been evaluated against some of the most dangerous chemical warfare agents including VX, GD, and mustard gas. The technology is applied in the VapourKlenz Face Mask to break down chemicals and odors through our mini filtration device on the mask that allows you to avoid breathing in toxic chemicals caused by chemical attacks.

History of Mustard Gas: Is it Still Used Today?

Mustard gas is a chemical agent that can cause severe burning of the eyes, skin and respiratory tract. This type of gas was first introduced into chemical warfare during World War I, as the gas is able to affect its victims in masses. It is known for its ability to be absorbed into the body through inhalation, ingestion, or by coming into contact with the skin or eyes. The FAST-ACT Decon Mitt protects against mustard gas releases and when you or your personal items have been contaminated by this chemical. It is a safe and easy method to wipe away chemical spills or contamination. Mustard gas can be harmful and “preppers” may want to consider being prepared in case of a circumstance where mustard gas is released into their environment.

Doomsday Prepper Spill Kit: Essential for Your Bug Out Bag

Nobody wants to be in a situation where they have to drop everything and leave-dodge ASAP. In an emergency situation many “doomsday preppers” take precaution and have an escape bag packed and ready to go, this bag is commonly referred to as a Bug Out Bag. A Bug out Bag consists of necessary survival items that one feels is necessary when SHTF, one might even have a travel bug out bag packed and prepared for when they are on the go. When composing your best bug out bag some common items that many have stocked away ready to go include food, water, first-aid kits, weapons, and other survival gear. Other protective gear you may want to consider includes chemical protection products for your ultimate bug out bag for doomsday preppers when they are exposed to chemical releases in your environment. The FAST-ACT Powder Bottle Pack includes two 50-gram proofer bottles of FAST-ACT. Just tear open the pack, flip open the bottle top, aim and squeeze in the direction of the surface you need to decontaminate. The powder reduces both liquid and vapor hazards and works great in conjunction with the FAST-ACT Microfiber Towel Pack. The FAST-ACT Microfiber Towel includes two microfiber towels that easily absorb excess liquid chemicals from any surface. It can be used for surface decontamination, chemical decontamination, and even gear clean up.