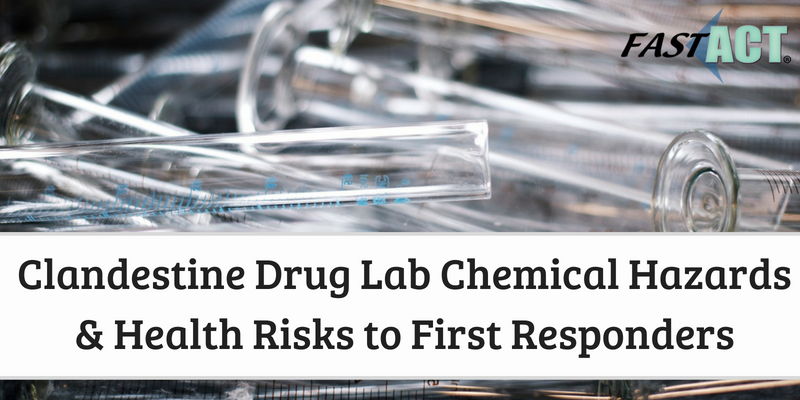 Chemical hazards can be present in almost every environment, but significant chemical dangers are only present in extremely volatile environments. Laboratories are a notoriously hazardous area for chemical threats as multiple chemicals are available in the area and could potentially mix to create an extremely hazardous chemical spill or vapor release. Lab workers and most importantly first responders require extensive training and knowledge on chemical dangers, how to safely shield yourself and others from these hazards, and the necessary steps to take to decontaminate the chemical hazards in the environment. According to the Drug Enforcement Agency (DEA), in 2014, there were over 9,338 laboratory incidents including labs and dump areas in the United States. This number has steadily increased as the years have progressed, making the danger of chemical spills heightened for first responders. A big contributing factor to this increased number of chemical spills is from illegal clandestine drug labs. A clandestine laboratory is a place where the collection and preparation of illegal substances are performed. The manufacturing of drugs, explosives, and even chemical warfare weapons was found in these ‘labs’, however, the main production in these labs is the manufacturing of the illegal drug methamphetamine. Toxic chemicals are used in the creation of these illegal substances, therefore the risks associated with entering these labs unprotected is elevated.

Dangers Present in a Clandestine Lab

Every year across the United States, first responders are exposed and injured in clandestine labs. These labs are not a new issue for first responders though. Since the activities performed in the labs are illegal they are often constructed for ease of concealing the lab, rather than focused on the safety. Many times, the operators of clandestine labs are inexperienced and have little education on chemicals – their dangers and hazards of mixing and combining different chemicals. A number of hazards exist in the environment which includes toxic releases from the chemicals and gases produced, fires, explosions, and chemical burns. Therefore, clandestine laboratories create obscured dangers that emergency responders will need to identify to protect themselves and others from, and this is accomplished through proper first responder training.

Clan labs produce highly unstable environments because of the reactions of the amalgam of chemicals that are used in conjunction with each other. Other factors that produce a hazardous environment include water-reactive chemicals, elements used in heating, and poor ventilation that can heighten the volatility of the environment. Illegal drugs produced in these labs include Methamphetamine, Phenyl-2-Propanone (P2P), LSD, PCP, MDA/MDPP (Ecstasy), Methaqualude, Methcathinone, and Fentanyl. Many of these drugs utilize a long list of chemicals in its construction, which can possibly create a toxic environment when combined. Methamphetamines, for example, can be made from an estimated 34 chemicals. Thus, these chemicals can react in a number of different ways depending on the amount and combination mixed with each chemical compound.

Health effects typically obtained from exposures to clan labs can vary. Specifically, for hazmat and first responders that in some instances are unequipped with the necessary protective supplies and decontamination equipment that may be required in the clan lab. The level of health hazard presented varies based on the specific agent that you are exposed to, the route of exposure, the level of concentration of the toxin, and the duration of the exposure. Commonly reported symptoms to include nausea, headache, irritation affecting the skin, eyes, and mucous membrane. However, depending on the actual length of exposure the symptoms can be exacerbated significantly. First responders, therefore, need to be trained on the steps to take in this instance of entering a clan lab, and what equipment is required to prevent potential health effects from exposure.

With the increased number of clandestine labs throughout the country, a correlating increase in problems from confronting state and local agencies that are called to these labs has begun to occur. These officials are often times the first to encounter these labs and therefore must be the ones to investigate, dismantle, and dispose of toxic/hazardous chemicals accordingly. The DEA Basic Clandestine Laboratory Certification School is the most distinguishable law enforcement – clandestine training according to OSHA standards. Due to the unique circumstances involved in raiding clandestine laboratory sites, tactical and safety precautions must be implemented upon entry of the lab. First responders having the proper training and knowledge of clan labs can help to minimize potential health hazards from exposure to these officials.

Clandestine laboratories contain many chemicals which can either produce a chemical vapor or liquid chemical that can produce hazards in the contaminated area. First responders and hazmat are required to have extensive knowledge of chemicals and a decontamination solution for each chemical class. Thus, they were required to handle and treat all cases with the utmost level of caution. The difficulty associated with determining each chemical is extremely high, as chemicals that are mixed with others can create an even more hazardous environment. However, with FAST-ACT a level of protection to Emergency Responders is available that has never before existed. The broad protection against volatile toxic chemicals afforded by FAST-ACT will provide law enforcement and emergency response workers an increased level of protection especially in dealing with clan labs.

FAST-ACT utilizes a patented technology that will immediately reduce the threat level by initially containing the chemicals into a solid non-vapor releasing form. For a broad spectrum of chemicals, FAST-ACT will begin to neutralize the chemical, as it has been tested against many chemicals that are commonly found in this type of environment. This eliminates the added time and difficulty of determining the chemical at play that needs to be contaminated, as FAST-ACT can most likely contaminate whatever chemical is in the environment. FAST-ACT is offered in pressurized cylinders capable of addressing both liquid and vapor hazards, manually dispersed containers, kits for liquid hazard treatment, and mitts for equipment and small-scale decontamination.