Exposure to fentanyl for emergency responders has increased ten-fold over time, and as the potential risk of exposure has increased the need for methods of preventing occupational exposure to fentanyl has never been more vital. With the production of these potentially fatal drugs at a steady incline, responders are becoming more and more likely to encounter this illicit fentanyl during raids, surveying, and police calls than ever before. Fentanyl can enter the body through a number of passageways including inhalation, mucous membrane contact, ingestion, and through needle exposure. If fentanyl enters any of these passageways it could potentially result in a variety of symptoms that can be fatal. NIOSH has categorized and identified the major job categories that could fall victim to fentanyl exposure and these jobs include pre-hospital patient care, law enforcement, investigation and evidence handling, and special operations and decontamination. Below we are going to discuss the key preventive measures to implement to avoid occupation exposure to fentanyl for emergency responders.

1. Safety Procedures: For first responders, safety procedures must be in place especially when fentanyl or other synthetic opioids are suspected or present in the environment. When first responders are called to the scene, an analysis should take place to determine the level of risk and the appropriate safety measures to implement. First responders should be cautious of the following when at an investigating scene:

-Do not eat or drink while in the area

-Avoid usage of the bathroom

-Do not touch eyes, nose, mouth after touching any surface

-Wash hands with soap and water immediately following exposure to this substance.

2. Training: If you are a first responder and have a higher risk of fentanyl exposure, you should receive special training on how to effectively evaluate for risks upon entering an area. This training will include learning how to detect fentanyl and other synthetic opioids, when to use PPE, the potential risks of exposure, and recognizing signs and symptoms of fentanyl and how to seek medical help.

3. PPE: Personal Protective Equipment is recommended for protection against fentanyl and other potentially toxic substances. There are three levels of PPE, minimal, moderate, and high. Minimal PPE is when there are suspicions of fentanyl but no visible fentanyl present in the environment. Moderate PPE is in the case that a small amount of fentanyl is visible. And High PPE is when a large quantity of fentanyl is found in the area. 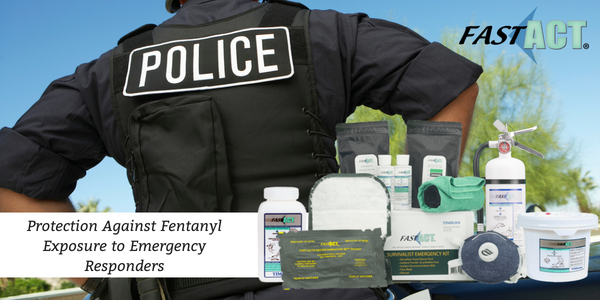