Does Your Fire Department Have a Rapid Intervention Team (RIT)

Fire departments are often tasked with handling emergency activities that can present to the responding firefighters a varying degree of risk and danger depending on the situation at hand. Rapid intervention teams (RIT), rapid intervention companies (RIC), and firefighter assist and search teams (FAST) all serve the same purpose to fire departments. They are there to facilitate their fellow firefighters who have become lost, trapped, or injured during a responding incident. The potential possibilities that may undergo a fire department upon a responding call can be dangerous and downright deadly. Sometimes incidents will occur that leaves a firefighter trapped or lost in an environment while on scene of an incident. When a frightening situation like that happens the RIT or FAST is called to be of service and aid in the issue present to the responding fire department and firefighters.

What are the responsibilities of the Rapid Intervention Team and why is it important to integrate (RIT) or (FAST) within your fire department? Find out by reading down below! 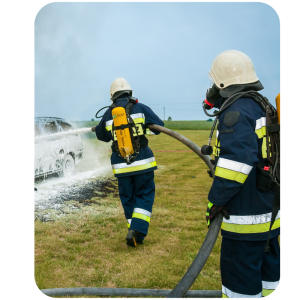 What is a Rapid Intervention Team (RIT)

Rapid intervention team is a team of two or more firefighters that are solely dedicated to the search and rescue of other firefighters in danger or distress. Many fire departments spend quite a bit of time on training rapid intervention teams (RITs) and a lot of information has been presented via websites and magazines on different tools and techniques that go along with the overall RIT operations.

This type of team is a critical fireground function that is needed to be established by clear guidelines that are consistent with the need of the operation and the Incident Commander (IC). A fire departments RIT should be fully equipped with all appropriate Personal Protection Equipment (PPE) including protective clothing, gear, SCBA and specialized rescue equipment needed based on the specific operation they are facing at hand.

Fire rescue and the establishment of RIT is not something new for fire departments. Rapid intervention teams can be traced all the way back to 1915 in New York City, where the earliest attempts of forming and organizing a group like RIT came to develop. The concept originated in March 1915, with trapped firefighters in an incident that needed rescuing from the environment. This went on to progress in the late 1960s and early 1970s with London Fire Brigade who developed “Emergency Teams” that were equipped with emergency supplies such as air supply equipment and air transfer lines.

Eventually this formed into the “buddy system” or “two-in/two-out rule” – this requires four people to assemble prior to entry, where two people would remain outside to provide immediate assistance to the two inside if they required support. Ultimately, it was determined that if RIT is not in place or cannot perform in a safe and timely manner, it is possible that firefighters may die or be seriously injured. Thus, the forming of a rapid intervention team is critical for protecting the lives and health of responding firefighters. 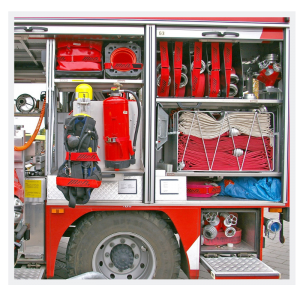 The importance of assigning responsibilities to RIT members is critical before entering into an incident scene. Outlining a layout of responsibilities should be done through the use of riding assignments. This will help give direction to the responding firefighters as they will know prior to arrival that they will be operating as the RIT on scene, either because they were specifically dispatched as RIT or through department operating guidelines that assigned the RIT to a company based on the arrival order to the area.

When rapid intervention teams arrive at the fireground, the members will gather their equipment and tools while the responding company officers perform a size-up and gets a report from the incident commander (IC). The tools and equipment of RIT will vary from department to department, but the standard minimum tools required includes the following:

All firefighter trucks and company trucks in the department carry a basic complement of RIT equipment. As we mentioned above, the key pieces of rapid intervention team equipment include a set of irons, a 200’ RIT tagline, a thermal imagining camera, a Scott Pak-Tracker firefighter locator, and an additional RIT air supply. This array of equipment is also carried by the chief and safety chief’s vehicle to ensure that there are adequate supplies of the equipment when arriving to the scene for the first-arriving RIT companies.

RIT equipment is a topic that sparks a lot of talk and discussion. Beyond the basic equipment for rapid intervention teams, the second RIT truck has an entire set of truck company equipment at its disposal if needed by the responding team. 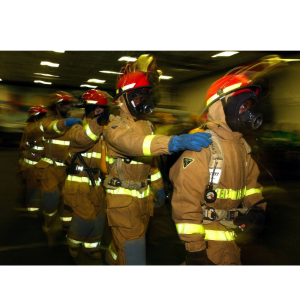 The RIT is no place for inexperienced and untrained firefighters, as they are left to deal with extreme situations and circumstances that will require extensive knowledge and experience to conduct an effective solution for the incident. Ultimately, these firefighters should be the best trained, best equipped, psychologically hardened and physically fit individuals to be an effective member of RIT. Each and every RIT situation will be different from the next, and therefore having a seasoned firefighter as part of the RIT will be pertinent to the safety of the environment and the firefighters in distress.

Some of the most common situations that a RIT member must be able to handle include the following:

Decontaminating a chemical release is a very difficult and time-consuming process that requires extensive knowledge of chemicals to be able to identify the chemical released and the best method to decontaminate this chemical. Typically, identifying a chemical requires detectors and the use of an ABC-spill kit to decontaminate the chemical depending on the specific chemical. Although this process works effectively it can be very time-consuming during an incident that needs immediate action.

FAST-ACT® is a proprietary formulation of non-toxic high-performance specialty materials effective at neutralizing a wide range of toxic chemicals with the added capability to destroy chemical warfare agents.  The FAST-ACT formulation is non-flammable, non-corrosive, and significantly reduces both liquid and vapor hazards.  Since the dry powder neutralizes threats upon contact, on-site incident management and clean up times are reduced. FAST-ACT can be safely applied to any liquid spill or vapor release enabling Emergency Responders to utilize one technology when faced with a wide variety of known or unknown chemical hazards.