What is Your Response Strategy for Unidentified Materials? 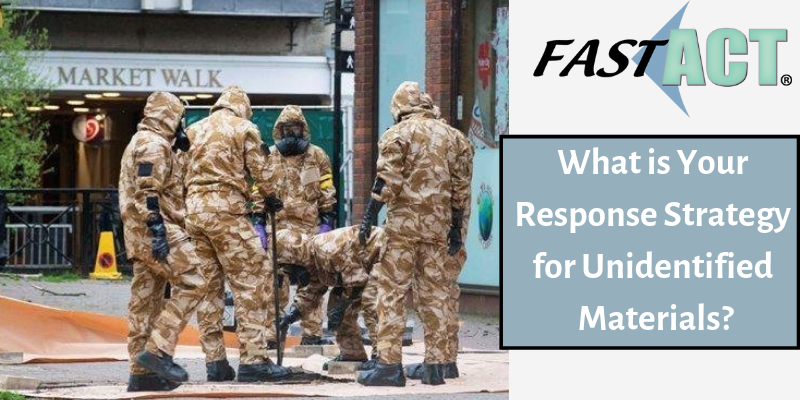 The field of emergency response is full of gray areas and unknowns, with very little time to prepare for the incident at hand. Emergency responders and HAZMAT teams must make rapid decision making upon an incident scene, thus training and preparations for a wide array of incidents and hazardous issues is required for these individuals. Each and every day these workers will experience a new round of incidents and scenarios that they must respond to including response to hazardous and unidentified materials.

An unidentified materials incident is a hazmat scene in which a material is present but is unable to be identified prior to a response strategy being applied. This type of situation can be extremely dangerous for HAZMAT and emergency responders and will require preparation & planning of a response strategy before this unknown incident occurs in the field.

What are the different levels of HAZMAT response and how can emergency responders appropriately and effectively respond to an unidentified materials incident? Find out by reading more below!

What Does HAZMAT Mean & What Duties Do They Perform 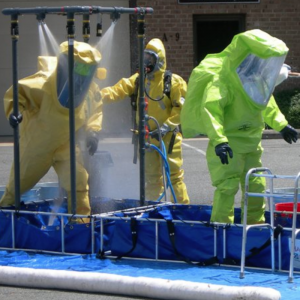 HAZMAT stands for the abbreviations “Hazardous Materials” – which are substances in quantities or forms that can pose a major risk to human health, property, or the environment. The typical substances that are classified as ‘hazardous materials’ include toxic chemicals, fuels, nuclear waste products, and other CBRN agents.

The likelihood of a HAZMAT incident is more likely than you may have thought, as many products containing hazardous chemicals are routinely stored and used in homes. Furthermore, these materials are also commonly transported every day on highways, railroads, waterways, and even pipelines.

Unfortunately, thousands of HAZMAT incidents occur each year and can result in significant damage to the environment and public health. When a hazardous materials incident occurs, it is the duty of HAZMAT teams and emergency responders to contain, neutralize, and decontaminate the materials present. This is with the goal in mind of securing the area and the safety of humans within the area of the affected incident.

A Hazardous Materials Response Team has a set of operational tasks that they are designated to perform. This organized group of hazardous materials technicians that respond to hazardous materials incidents deal with the use of Weapons of Mass Destruction (WMD) and other dangerous materials that may become present in the environment due to an accident, leak, or an attack. The mission of the HAZMAT Response Team is to ultimately control the spill and eliminate any imminent hazard to the public, and this response will range per situation.

The three most common HAZMAT situations that are typically responded to by emergency responders includes an incident involving hydrocarbons, narcotics and clandestine drug labs, and common household product incidents. These three different situations each require different response strategies to effectively contain and clear the environment. Below we are going to discuss the different levels of HAZMAT response per situation.

The Levels of HAZMAT Response

Generally, there are four different levels of HAZMAT response for hazardous materials. These four levels include awareness, operations, technicians, and specialists. 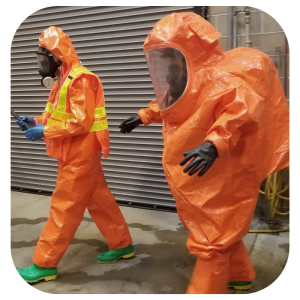 The awareness level of HAZMAT is the most basic and is designed for a person who in the course of their normal activities or duties, may be the first person on the scene of an emergency involving HAZMAT or CBRNe agents. The responders at this level are expected to understand and be able to detect the presence of these materials. An awareness level certification can be obtained from a university, medical center, and from FEMA through exams.

An operational level responder is those who respond to releases or potential releases of hazardous materials or CBRNe as an initial response to the incident to help protect nearby individuals and the environment. Operational level responders are expected to respond in a defensive fashion to control the release from a safe distance to keep it from spreading. In comparison to the awareness level, operations level requires a more hands-on approach to an incident of this nature. They will also be responsible for performing evacuations and establishing hazard zones.

To achieve operations level, responders are trained in such HAZMAT/CBRNe defensive techniques such as absorption, damming, diking, diverting, retention vapor dispersion, and suppression. This includes workers such as firefighters, environmental and conservation personnel, and other public safety personnel.

A highly specialized and technical level, the technician level has responders that take offensive action in responding to HAZMAT releases for the purpose of controlling the release. At this level, the responders are classified as HAZMAT Technicians and are supposed to use specialize chemical PPE. On average, training for HAZMAT Technicians is 40 hours, and they are to have a strong background or understanding of basic chemistry.

The highest level of HAZMAT response, the specialist responder has a very extensive and advanced level of knowledge in chemistry, biology, and other science disciplines. The specialist responders work with technician level responders to take a hands-on approach in controlling a hazardous release. In some instances, these responders serve as trouble-shooters at HAZMAT/CBRNe incidents. Training to be certified as a Specialist level is 24 hours and must contain a college degree.

What can HAZMAT and emergency responders do when they come across an unknown HAZMAT materials incident? Handling a situation of this magnitude can be very dangerous and extremely hard to contain. However, new and emerging technology has aided in situations just like this – with new detectors that are able to identify unknown gases and vapors in nearly minutes. Although this is a quick response time, sometimes it may be a couple minutes too long and risk the safety and containment of the unidentifiable hazardous material. When HAZMAT comes upon an incident, they will need to immediately take action, even if they are not necessarily sure what the material is in question.

FAST-ACT® is a proprietary formulation of non-toxic high-performance specialty materials effective at neutralizing a wide range of toxic chemicals with the added capability to destroy chemical warfare agents.  The FAST-ACT formulation is non-flammable, non-corrosive, and significantly reduces both liquid and vapor hazards.  Since the dry powder neutralizes threats upon contact, on-site incident management and clean up times are reduced. FAST-ACT is offered in pressurized cylinders capable of addressing both liquid and vapor hazards, manually dispersed containers, kits for liquid hazard treatment, and mitts for equipment and small scale decontamination.  FAST-ACT can be safely applied to any liquid spill or vapor release enabling Emergency Responders to utilize one technology when faced with a wide variety of known or unknown chemical hazards.